The following are my works on polar coding, from the oldest to the newest.

ModerDevia18 focuses on the moderate deviations regime (MDR) of polar coding. MDR is also called the moderate deviations principle (MDP) paradigm in some references. It addresses the relation among block length ($N$), error probability ($P_e$), and code rate ($R$) in the region where $P_e$ is about $\exp( -N^\pi )$ and $R$ is about $\text{Capacity} - N^{-\rho}$ for some positive numbers $\pi, \rho$. The precise goal is to characterize the region of $(\pi, \rho)$ pairs that are achievable for $N \to \infty$.

While ModerDevia18 deals with classical polar codes as constructed in Arıkan’s original paper, LargeDevia18 extends the theory to a wide class of polar codes. Given a kernel $G$, its scaling exponent $\mu$ (or its inverse $\rho = 1/\mu$), and its partial distances, we are able to predict how codes constructed with $G$ will behave, up to some big-$O$ notations. Remark: The result says it is easy to go from $\rho$ (or $\mu$) to MDP. But $\rho$ is usually difficult to estimate. Alternatively, there are easy ways to bound $\rho$. In that case, our MDP prediction becomes a one-way bound.

LoglogTime18 stands on the result of ModerDevia18 and shows that, if we would like to tolerate higher $P_e$ and lower $R$, we can reduce the encoding and decoding complexities from $\log N$ per information bit to $\log(\log N)$ per information bit. By higher $P_e$ we mean that $P_e$ scales as $N^{-1/5}$; By lower $R$ we that mean that $R$ scales as $\text{Capacity}-N^{-1/5}$. Thus the constructed codes barely, but still, achieve capacity.

While LoglogTime18 deals with the binary erasure channels, LoglogTime19 handles arbitrary symmetric $p$-ary channels, where $p$ is any prime. The latter result is similar—by tolerating that $P_e$ converges to $0$ slower and that $R$ converges to the capacity slower, we can reduce the complexity to $\log(\log N)$ per information bit. In both LoglogTime18 and LoglogTime19, codes are construct with the standard kernel $[^1_1{}^0_1]$.

We later found (not included in any paper) that the log-log behavior generalizes to arbitrary discrete memoryless channels. For general channels, however, the standard kernel $[^1_1{}^0_1]$ does not polarize anymore. One must switch to other kernels, sometimes nonlinear.

Hypotenuse19 shows that it is possible to construct codes whose error probabilities and code rates scale like random codes’ and encoding and decoding complexities scale like polar codes’. On one hand, random codes’ error and rate are considered the optimal. On the other, polar codes’ complexity ($\log N$) is considered low. (Not the lowest possible complexity, as there exist $\log(\log N)$ constructions for general channels and $O(1)$ constructions for BEC.) This result holds for all discrete memoryless channels, the family of channels Shannon considered in 1948. This result extends a series of works done by (alphabetically) Arıkan, Błasiok, Fazeli, Guruswami, Hassani, Honda, Korada, Mori, Şaşoğlu, Sutter, etc.

For a figurative comparison, see Figure 1 on page 3 in Hypotenuse19.

Here is a table for the error–gap–complexity trade-offs of some well-known capacity-achieving codes and the corresponding channels. 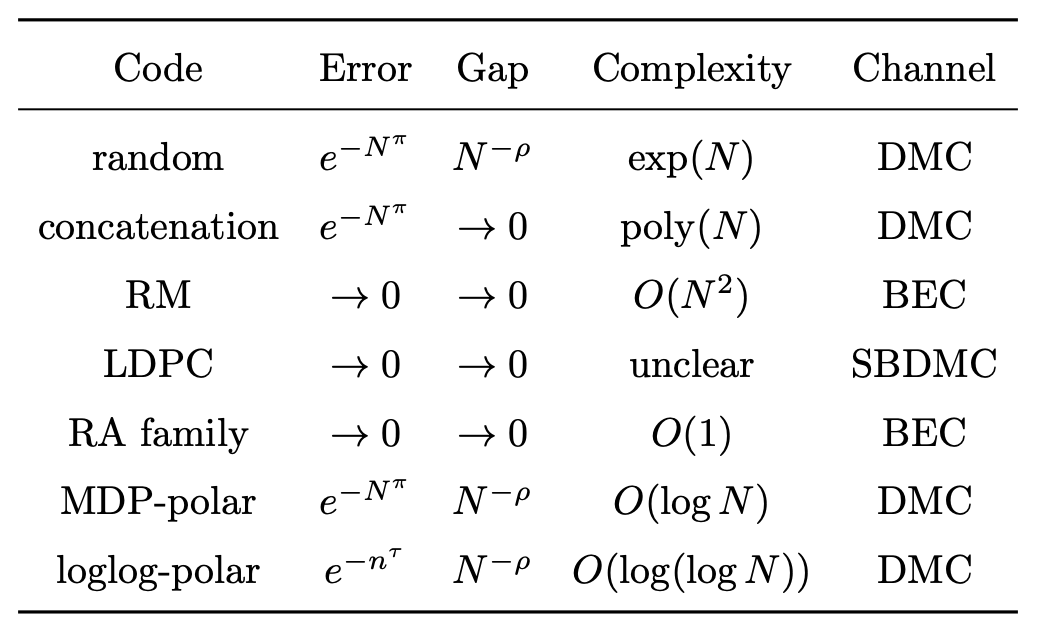